Skip to content
Francesco A. Pia, Ph.D., has formulated The Instinctive Drowning Response. It describes what people do to avoid drowning and is not like what most of us believe drowning looks like. Apparently, in 10 percent of drownings people nearby have no idea the victim is in trouble. Read about the Instinctive Drowning Response in this article […] Continue Reading
Storing ‘beans, bandages & bullets’ is a common saying amongst people into emergency preparedness. Lots of people focus on stashing away food, medical supplies and firearms. One easy preparedness activity that’s often overlooked is growing your own food. This is vital for long-term sustainability and has the advantage that you can enjoy the healthy yields […] Continue Reading
HuwsNursey talks about safety concerns with growing food in old tires. Summary: Growing food in plastic containers can leech harmful chemicals into the soil, which will then be absorbed into the food. There are similar concerns with growing food in tires. New York State Department of Environmental Conservation: leaching of chemicals from partially burned tires, […] Continue Reading
Tim Macwelch, survival instructor and author of “How To Survive Anything,” tells Business Insider about his bug-out-bag. Continue Reading
My clients are based overseas so for me, an important part of preparedness is making sure I have backup power and communications to keep working during power outages. As you'd expect in a country like the Philippines where power-cuts are commonplace, backup lighting and even battery-powered electric fans can be found in any hardware store. (I covered my observations on emergency lighting in a previous article.) However, there doesn't seem to be much available for other appliances. Of course, larger businesses and commercial buildings have this covered but the equipment tends to be outside the price range for most individual residences, freelancers and home-based workers. For a long time I'd simply relied on my laptop's battery and a USB modem to keep working. Last year I discovered and purchased a product called Powergorilla which allowed me to extend work time for a few more hours. The combination has been fine for our usual brown-outs and in normal situations, it's feasible to simply move on to a cafe or mall with internet if you need to leech a little more electricity. However, this set-up is inadequate for more serious disruptions and our series of big floods forced me to re-evaluate the available options. One solution would be to simply buy more Powergorilla units but they're expensive, hard to find locally (mine was purchased overseas) and intended for electronic gadgets. I wanted something with a bit more flexibility, was readily available and wouldn't break the bank to upgrade. After a long time searching and finding nothing suitable, I decided to put my long neglected electronics studies to some practical use by building my own. Fortunately I'm a bit of a geek so had lots of parts lying around that could be scavenged. 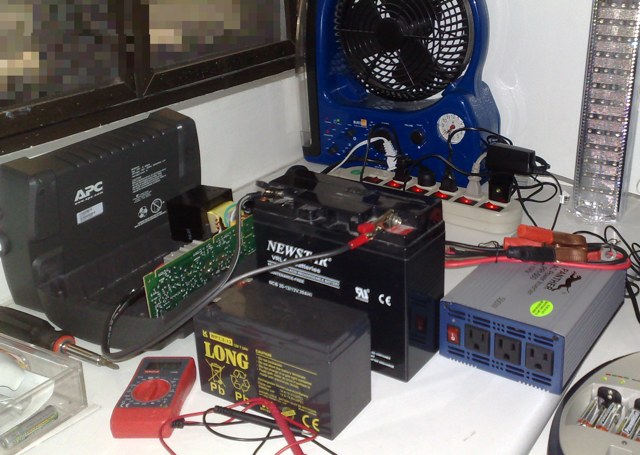 Those of us who live in houses have quite a few options ranging from installing a backup generator to using solar and wind power. On the other hand, condo-dwellers like myself mostly rely on the building to supply backup power. Higher-end condos often provide a few outlets in each unit that are hooked up to the building generator. Unfortunately, in our building only essential services such as the elevator and emergency lights remain powered. This means that during a brown-out, we either have to wait it out or go elsewhere to scrounge some element of civilization. To a large extent, tenants who live in rented housing and homeowners in the tighter subdivisions of Metro Manila face similar problems to condo-dwellers. First of all, space is a premium and storing hazardous substances like liquid fuel is unwise. We also can't simply bolt equipment, such as photovoltaics and wind turbines, to the outside walls. Thus, I needed to find a way to safely store backup-power whilst keeping the package small and unobtrusive. The answer was in the tried-and-trusted friend of the RV (recreational vehicle) enthusiast: the 12-volt lead acid battery. More specifically, the VRLA (valve-regulated lead–acid) battery.

The ugly mess you see above is the result of my experimentations. I'll document what I did here for those of you who are inclined to give it a try. Note that while this project is fairly straightforward, it should only be undertaken by someone with some experience working with electrical components. Don't blame me if you end up burning down your home or electrocuting yourself!

The lead acid battery is the heart of this system. Some people have used car batteries—which will work—but these are designed to provide huge amounts of power for a short time (e.g. to start your car engine). Continuously discharging car batteries to power appliances will quickly kill them. What's really needed is a deep-cycle battery, such as those used in golf carts, boats and RVs. Be warned, though: many types of deep-cycle battery contain acid that is easily spilt, thus causing a potential hazard. For the home and office environment, the safer choice is a valve-regulated lead–acid battery (VRLA), otherwise known as a sealed battery. VRLAs are the type you can find in emergency lights and usually come in 4, 6 or 12 volts. As the name implies, they are sealed to prevent acid spillage.

12 volt VRLA battery
Pictured is a 20AH (amp-hour) battery which I chose as it was easiest to find and not too expensive (truth be told, the deciding factor was that this one was on sale for about P2,000). Ideally it would be 40AH or 65AH for longer run time but VRLAs are amongst the most expensive lead acid batteries. (At the time of writing, a Motololite 38AH is P5,950 while the 65AH is P9,759!).

Warning: incorrectly charging or in any way mishandling lead acid batteries can be very dangerous. They're not called lead ACID batteries because they contain marshmallows and rainbows. They contain ACID, the kind that melts your eyes out. If you're going to perform a hack like this, do lots of research first.
Lead acid batteries should be put through specific charging cycles to keep them in good condition. This process requires microprocessor-controlled 'smart' chargers that run through three or four stage regulated charging. For our purposes of a back-up power system, an important part is the float stage where you can have the battery connected indefinitely to keep it at a fully charged state. It seemed, though, that every hardware store assistant I spoke with had no idea where I could find a smart charger. Also, none of those available on the store display seemed to fit the bill. Being a computer geek, I had some UPS (uninterruptible power supply) units lying around which served as a catalyst for an idea. 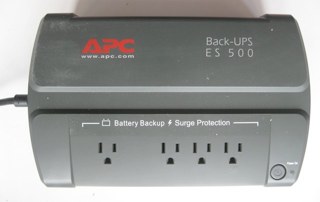 APC uninterruptible power supply
A UPS device is intended to provide a few minutes of extra power to safely shut down your computer in the event of a power cut. Theoretically it has all the components you need to power appliances: a lead acid battery, a battery charger, and an inverter to convert the stored DC (direct current) from the battery to AC (alternating current) needed by most appliances. In practice, it's designed to do so only for a few minutes and using it continuously could cause the components to overheat or even meltdown, which is not very useful. Nevertheless, it should at least be able to maintain a battery at full charge. A few technical support emails with APC confirmed that my model had the circuitry for over-charge and discharge protection. This means that it would keep a battery topped up while preventing it from getting over-charged. For my needs this is good enough and after a quick hack of extending the battery leads, it was good to go. 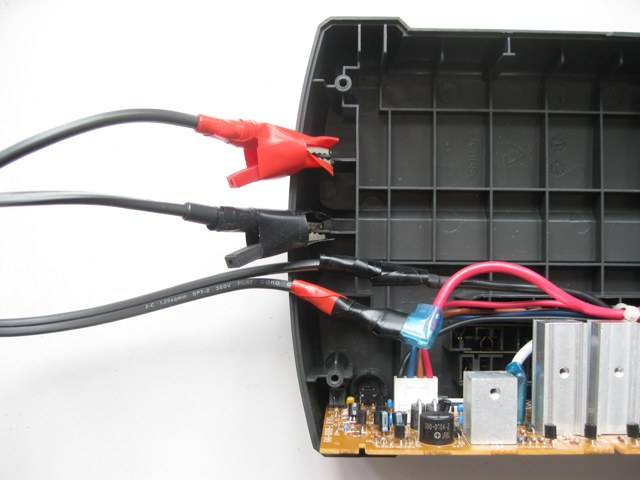 An inverter turns DC battery power into AC power needed by most appliances. For me, a Belkin 150W AC Anywhere inverter works well enough for the set-up in my condo unit, allowing me to power a few devices such as a laptop, modem router, electric fan, and small battery chargers. The correct choice of inverter is quite a detailed topic so make sure you do some research before purchasing one for your own needs as the wrong model could damage your equipment. In the picture of power pack components above, you'll see a Panther 500W inverter. This is bigger than necessary for my condo battery so its main purpose is for use with a vehicle in a separate location. (More about this in a future article.)

Inverters introduce inefficiencies so it's best to run directly from DC whenever possible. A multi-socket car adapter for cigarette lighter receptacles provides a convenient way to connect your DC gadgets to the power pack. The adapter pictured is a CDR King product from which I removed the cigarette lighter plug. In its place I soldered some ring connectors and a fuse holder. The ring connectors will then attach to the battery terminals during usage. You'll notice that the CDR King adapter, as with many commonly available, has quite thin wiring. It's only rated to take a maximum of 5 amps. Eventually I'll upgrade it to use heavier gauge wire but for now it'll do as my pack currently does not take much load. Aside from providing 12 volts, this model also has a USB port for 5 volt devices such as iPhones and phone chargers. 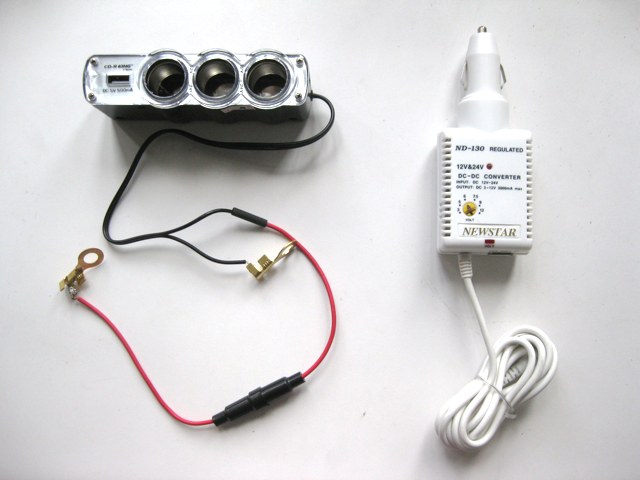 Inspect the commonly available emergency appliances sold in Philippine-based hardware stores and you'll find that many use 6 volts DC. A DC-DC converter provides me with 6 volts for extended run time on my emergency lights, radios and fans if their internal batteries become depleted. Previous experience tells me that my 20AH battery will run down long before the LED emergency lights. However, it's nice to have the option for flexibility.

The multimeter is valuable for checking the battery state and general troubleshooting.

From some not-so-scientific trial usage, this set-up lasts about a day intermittently running a range of devices such as a laptop, travel router, fans and mobile phone chargers. If I'm frugal with the consumption, work from my iPad, and bring in the Powergorilla, I can reasonably expect to hold out for several days during an emergency situation. (This is an estimate since my workload hasn't allowed me to do a real-life multi-day test.) Some improvements are certainly in order: 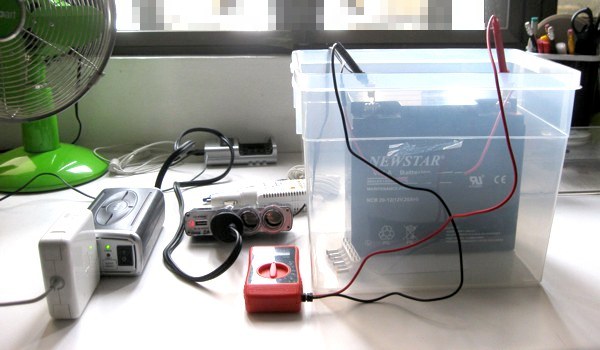 The 12v battery gives my laptop some extra run-time during a brown-out
I'd consider my set-up a bare-bones capacity. It isn't great but certainly several steps above the original 2 hours or so laptop battery run-time. Still, my plan was to assemble the necessary components and improve as budget allows. What I currently have gives me something usable in the meantime with room to grow. With a few upgrades, it could potentially provide power for other luxuries like a mini fridge, toaster oven, TV and DVD player.
This article is the first in a series where I'll document my experiments with small-scale alternative power. In the next part I'll describe the power pack in use with my everyday work equipment.
Continue Reading