Skip to content
The Metropolitan Manila Development Authority has identified the following flood-prone areas within Metro Manila:
I've started mapping the areas on Google Maps. The markings simply highlight the approximate points identified. They do not correspond to the actual area that's expected to flood as this information was not given.
View Manila flood areas in a larger map This is a collaborative project so if you'd like to get involved, please contact me and I'll add you as a collaborator. Continue Reading
A diaper bag is one thing that parents of an infant always bring when out of the home. As part of our preparedness planning, my wife and I decided to upgrade our baby's diaper bag to a fully-fledged bug-out bag. The reason for this is that since we're carrying an extra bag anyway, we might as well include some items needed for a baby's emergency kit. The bag hangs off our stroller so the added weight isn't any real inconvenience. My wife wrote an article on her new blog describing her suggestions for what to put in your baby bug-out bag:

You can read her article at Bubu and mama: Baby Bug-Out Bag Continue Reading
The aftermath of a disaster can often kill more people than the disaster itself and one of the main risks is disease. Poor sanitation caused by the disruption often leads to outbreaks of acute diarrhea. We saw this during Typhoon Ondoy where diarrhea was one of the top killers in evacuation centers. It was also a huge problem in post-earthquake Haiti when a cholera epidemic infected 1,500 people in just a few days. Even during normal times, diarrhea is the 3rd leading cause of child illness and the 4th leading cause of deaths among children less than 5 years in the Philippines. Diarrhea kills through rapid dehydration and children are especially susceptible as they can succumb in a matter of hours. Nevertheless, deaths can be prevented by simply making sure that the patient drinks a lot of clean water with oral rehydration salts. Unfortunately, these are difficult to find after a disaster. Aid workers in Haiti were distressed to find that many were dying for want of something that costs so little.

Simple ways to safeguard your family

There's no reason why your family should suffer from an outbreak of diarrhea.

If you don't have any commercially produced ORS at home, rehydrate.org suggests the following alternatives: Remember: make sure you first check with your pediatrician if these alternatives are suitable for your child.

Continue Reading
Manila is not yet prepared to handle a major disaster. How prepared are you? In times of great catastrophe, you cannot expect to depend on emergency services, the government, or even your neighbors and friends. All resources will be stretched to their limit. It may be several days or even weeks before help comes so you must plan to help yourself until the crisis passes. Depending on the scale of the disaster, you may also need to help with rebuilding your community. Continue Reading
During Typhoon Ondoy, our condo unit was without electricity for almost three days. Although the building was fitted with backup generators, all power was diverted to essential services like elevators and common area emergency lighting. On the day after power was restored, my wife and I visited Ace Hardware in SM Makati to pick up some supplies and were greeted with a crowd of people panic-buying emergency lighting products. By the time we'd arrived in the early afternoon, Ace Hardware's stock was almost gone. I could only imagine that those poor people had been caught out without lighting during the brown-out and were desperately trying to rectify their mistake. Of course, by then it was too late because Metro Manila had already started to return to normal. Fortunately, we'd stocked up on a wide range of emergency lighting long before so although we still had to deal with the heat, at least it didn't have to be in the dark. The picture below shows a few of our emergency lighting devices. 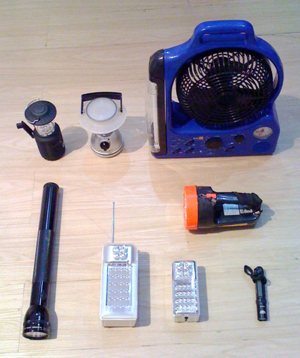 These range from plug-in rechargeables to hand-crank, D-cell, AA-cell and CRE123 powered lights. A few are multi-purpose devices that also include fan, radio, clock and cellphone charger. The lighting elements ranged from incandescent light bulb, LED and CFL.

Of all the models, the one that most suited the purpose of emergency light was the Akari Rechargeable Emergency Light (model AEL 969) which I bought for approx. Php1,100 at Office Warehouse. This included an AM/FM radio, mobile charger and allowed to you switch from four LED (120 hour run time) to 28 LED (50 hour run time). A few weeks after Typhoon Ondoy, I tested the unit again as I was curious to see how long it would last on a full charge. It ran for almost 5 days before discharging. I've been told that in emergencies, it's best to have a light that uses a common power source, such as standard C-cell or AA-cell batteries. The reasoning behind this is that their batteries can be stored for longer and it's easier to find replacements; proprietary rechargeable power packs, on the other-hand, need maintenance and are heavily dependent on a power supply to keep them charged. I do generally agree with this and will always have a few standard flashlights in my kit. However, my experience during Typhoon Ondoy shows that in all but the worst-case scenarios, things would most likely be getting back to normal by the time your rechargeable LED light starts to run down. Continue Reading
Water is always at the top of any disaster preparedness list as it's essential for survival. The generally accepted guideline is to set side 4 liters (1 gallon) of water per person, per day, for drinking and sanitation. Keep in mind that in a tropical country like the Philippines, even the slightest physical exertion is going to leave you dripping with perspiration, thereby causing your body to lose valuable water reserves. While water storage options are readily available, the biggest problem is that they tend to be bulky and need cycling to prevent a build up of harmful bacteria. This can be especially problematic in condo units where space is a premium. Being a condo dweller in Metro Manila with a wife and water-intensive baby, I know first-hand how difficult this can be. The solution I've found is to keep water caches in locations where they have practical every-day use. For example, a plastic jerry can with tap kept by the kitchen sink acts as water storage. Once in a while, we use it for washing dishes before topping up the jerry can with fresh tap water. 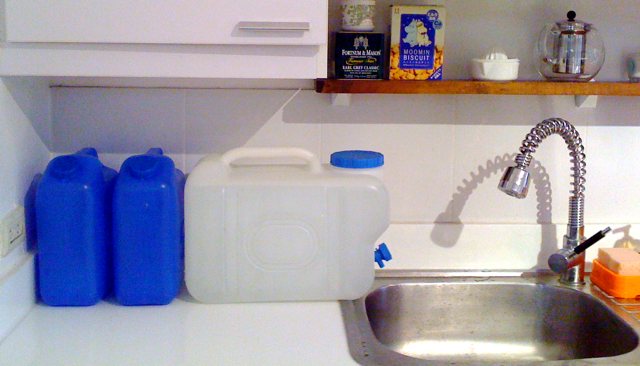 The clear plastic jerry can in the picture above holds 20 liters, which is enough to last one person for around 5 days. The blue plastic jerry cans hold just over 6 liters each. These can be purchased from hardware stores like Ace Hardware and True Value. (The 20 liter can was approximately Php300 and the blue 6 liter cans are Php49.) We also keep additional jerry cans in a cupboard and bottled mineral water in the fridge and pantry, as well as a balde (water bucket) in the shower. In total, I estimate that my wife, baby and I can go almost two weeks just using the stored water in our one-bedroom condo unit.

Note: be sure to store as much of your water as possible at floor level. If stored high up, such as on shelving, movement during an earthquake could cause them to fall. This not only risks injuring someone but also means you lose some of your water reserves. Continue Reading

According to the 2004 Metro Manila Earthquake Impact Reduction Study, the West Valley Fault System is entering its active phases which may result in an earthquake of at least magnitude 7. Of the all the cities in Metro Manila, seven are highlighted as being most at risk of heavy damage and casualties in the event of a massive earthquake. These are: Since governmental disaster management systems will be insufficient to cope with the disaster, it's important that each of us take steps now to reduce its impact. The maps below will help you assess how you could be affected should Manila be hit by a large earthquake. If you live or work in an area highlighted as having a higher risk, it would be wise to take extra precautions.

GMANews.tv has produced an interactive map showing the Valley Fault System together with nearby landmarks. Hovering your mouse over the red fault line will highlight the landmarks within two kilometers of the fault. 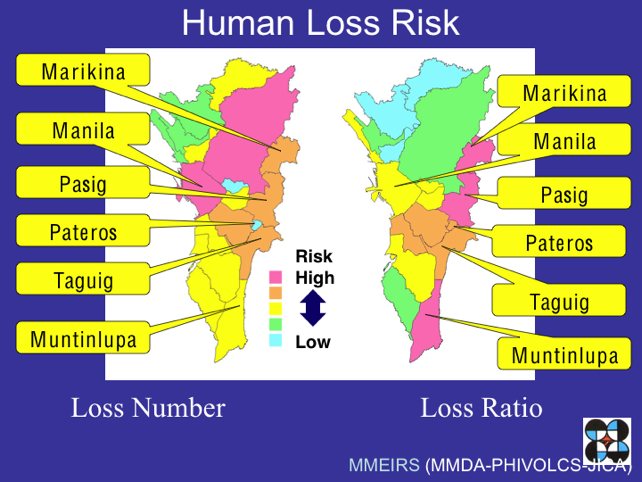 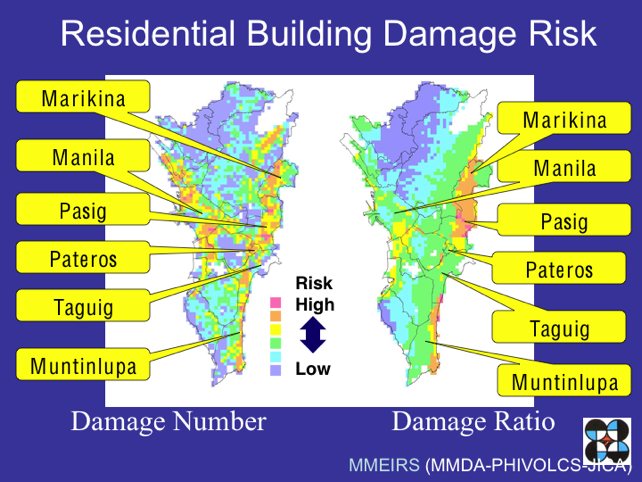 Active faults in the Philippines on Google Maps

Edited 22 Oct 2013: Google map added Zoom out and scroll to find your province. Zoom back in for your local area.
View Larger Map Continue Reading
After the Great East Japan Earthquake that hit the Tōhoku region of Japan in March 2011, the Philippine media quickly began reporting horror stories about what would happen if a big earthquake were to hit Metro Manila. Apparently, studies earlier this decade—some of which were kept secret by the government for a number of years—showed that we are woefully unprepared. However, most of the discussion focused on what needs to be done on a governmental level; there was very little advice about what we as individuals could do to prepare ourselves. As I began to do some research, I found that many resources are available online but most are United States-centric. While the principles of preparedness are independent of location and scenario, I thought it would be useful to have some information set in a context for the specific needs of Metro Manila inhabitants. My aim is for this website to fill that gap. Continue Reading