Skip to content
A primer video on how to make your own methane biodigester from The Urban Farming Guys based in the US. Our own rural communities in the Philippines may be able to adopt this idea to produce their own fuel. Continue Reading
I'd always been told that it's important for your survival kit to have three ways of making fire. For example, you may have a lighter, matches and flint and steel. All my emergency kits over the years had these and I'd been feeling pretty confident that I was prepared—that is, at least until Typhoon Ondoy. You see, while it was a major calamity for some people, my wife and I live in a condo in Metro Manila so for us, it ended up only being an inconvenience. The power was off and while we couldn't cook using our electric cooker, it was a simple matter to step out to buy food or eat at a restaurant. Breaking out my fire kit to start an open fire in our living room trash can wasn't a realistic option. This made me realize that my preparations in this area were inappropriate for our situation. Our fire kit may have been useful in a total catastrophe where we'd have to make a camp fire in an open space. However, it wasn't right for being holed up in a condo with no power. Our cooking capabilities were limited to two extremes: one in which utilities are working relatively normally or the other where there was a complete breakdown in social order. In reality, as Typhoon Ondoy demonstrated, we are more likely to experience varying degrees of intermediate emergencies. Fortunately, not being able to cook wasn't a major problem at that time as we had other options. Nevertheless, it did get me thinking about what would have happened if the situation had been more serious. I solved this problem by purchasing a portable gas cooker that takes small gas canisters. It allows us to do some basic cooking and sterilization inside our condo unit without posing an unacceptable fire hazard. Furthermore, the unit is small enough to be conveniently packed in a bag should we need to evacuate. 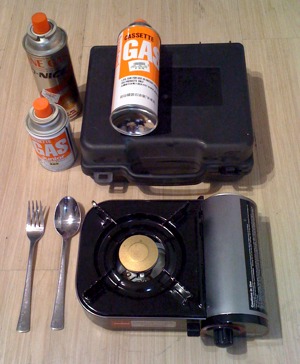 Portable gas cooker with carry case and spare canisters
A cooker like the one shown in the image can be purchased from many hardware stores like Ace Hardware and True Value for between Php800 and Php2,000. Spare gas canisters are about Php50 to Php80 depending on size. I've placed a spoon and fork next to the cooker to give you an idea of its size. The lesson here is to avoid blindly following rules-of-thumb when it comes to preparedness. What might work well for another person may be totally inappropriate to your environment and circumstances. Think realistically about how you and your family may respond to emergency scenarios and build your kit around that plan. Also remember to update your plan as your lifestyle changes. As a single person who enjoyed camping as a teenager, my simple fire kit would have been fine for almost any scenario. If things got bad enough, it wouldn't have been a problem to leave my condo for another location and live a little more ruggedly for a while. Now that I'm married and have a baby, this would not be at all desirable. Being equipped with only the bare basics may turn a manageable situation into an arduous challenge at best and life threatening scenario at worst. In conclusion, take a little time to run through a simple review of your current circumstances and make the necessary upgrades to your emergency kit. Continue Reading