Skip to content
Research conducted by the University of Pennsylvania Law School has found that emergency room visits and deaths spiked by at least one fourth when plastic bag bans went into effect in California. The culprit: food borne illnesses from bacteria like E. coli growing in reusable grocery bags. The study revealed: I wonder how many of our politicians who enforced plastic bag ban ordinances in their jurisdictions have thought of the unintended consequences of such a policy. Personally, I'm not convinced that plastic bag bans will have a positive impact on the environment. In fact, paper bags actually have an overall worse impact than plastic. Now we're also discovering a serious negative impact on human health in the affected community too. With plastic bag bans gaining momentum in the Philippines, we could be setting ourselves up for an unseen public health predicament. Regardless of what you believe, just remember to extend your basic food sanitation practices to your reusable grocery bags: Also keep in mind that if you have house helpers who do your shopping, they must also be taught these food safety practices. Continue Reading
Earlier this week, my infant daughter got sick and by the middle of the night had a worryingly high fever. Fortunately we'd stocked up on Calpol (paracetamol) so were quickly able to bring her temperature down to acceptable levels. Two things were indispensable over the following days: 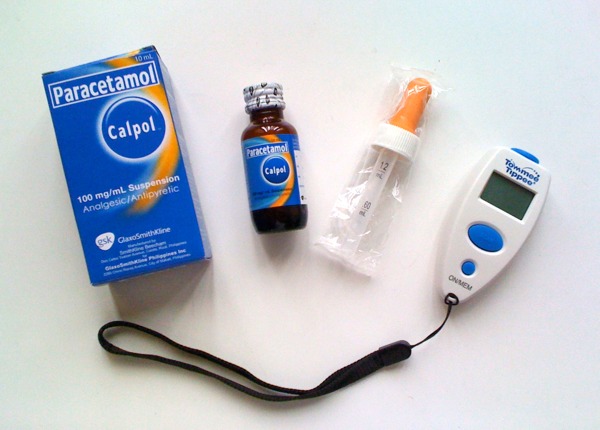 Calpol (Paracetamol) and digital thermometer
I'd gone to the range with friends a few days prior so the incident reminded me of a comment made by one of our Facebook group members a little while ago: "I pity the guy who spends all his money on guns and ammo, but doesn't buy food and medical preps for his family." The range trip cost approx. P1,500 for ammo but a bottle of Calpol was only P49. None of my guns or ammunition were any help that night but I'm pretty sure the Calpol saved us a trip to the ER. This is just a quick reminder to us all that while we're preparing for the big things, let's not forget the little emergencies. To paraphrase something told to me by Pinoy Prepper: "The best way to avoid disasters is to prepare for emergencies." So, for those of us with young children, why not take a quick look now in your medical supplies to check that you have the basics covered? This goes for new parents especially who may not yet have updated the stock to cover new family members. Continue Reading